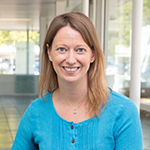 Bethany Ehlmann is a professor of planetary science at Caltech. She is also Associate Director of Caltech’s Keck Institute for Space Studies. Her research focuses on the mineralogy and chemistry of planetary surfaces, remote sensing techniques and instruments, astrobiology, and science policy and outreach. Her primary focus is unraveling Mars' environmental history and understanding water in the solar system.

Prof. Ehlmann is Principal Investigator of Lunar Trailblazer, a NASA smallsat mission with a goal to map the form, distribution, and abundance of water on the Moon and understand the lunar water cycle. She is a Deputy PI of the CRISM imaging spectrometer on the Mars Reconnaissance Orbiter, Participating Scientist on the Mars Science Laboratory Curiosity rover, Co-I on the Mastcam-Z and SHERLOC teams for the Mars 2020 Perseverance rover, and Co-I on the EMIT space station-based imaging spectrometer to explore Earth's dust source regions. She was also a member of the science team for the Mars Exploration Rovers (Spirit and Opportunity) and an Affiliate of the Dawn orbiter team during its exploration of the largest asteroid and dwarf planet Ceres. Prof. Ehlmann is working to propose instrument and mission concepts for Europa, Enceladus, Venus, the Moon, and asteroids.

In addition to her scientific research Prof. Ehlmann is active in policy and outreach. She presently serves as a member of the National Academies Committee on Astrobiology and Planetary Science and the Planetary Science and Astrobiology Decadal Survey 2023-2032 (Steering Committee member and Mars Panel vice-chair). She is President of the Planetary Society, the world’s largest non-profit focused on fostering space exploration, the search for life, and the protection of Earth from asteroid impacts. In 2018, she authored a children's book on solar system exploration with Jennifer Swanson and National Geographic Kids, Dr. E's Super Stellar Solar System.

Prior to her appointment at Caltech, Prof. Ehlmann was a European Union Marie Curie Fellow at the Institut d’Astrophysique Spatiale, Orsay, France. Originally from Tallahassee, FL, she earned her undergraduate degree at Washington University in St. Louis, earned M.Sc. degrees from the University of Oxford in Environmental Change and Management and in Geography as a Rhodes Scholar, and earned her M.S. and Ph.D. in Geological Sciences as a National Science Foundation graduate fellow at Brown University.